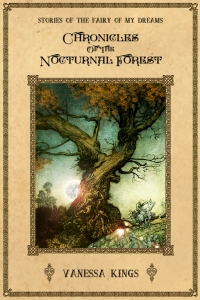 Melanie is living an ordinary, boring life when one night she is transported in her dreams to the Kingdom of Astebeth. Night after night, the fairy of her dreams will tell her the stories of the inhabitants of the Kingdom, its town, and the magical Nocturnal Forest nearby. A forest full of magical creatures where the impossible can happen. Soon, she comes to
suspect that her dreams may not only be dreams after all. Follow her on her incredible journeys that will take her to magical places and beyond Earth itself to discover the magical secret of the Nocturnal Forest in the first part of The Fairy of my Dreams trilogy.

I’m going to start by saying this book didn’t work for me. Your mileage may very much vary. This is book has a very strong fairytale feel, is sweet, innocent , and light. I can see that would appeal to other readers. Unfortunately I couldn’t bond with this book.

Melanie, the narrator, is a girl struggling to fit in. She wants to spend more time away from the real world, prefers her books to dealing with people. I could definitely relate to this. Initially, there’s a conflict with her parents, who naturally want her to come out of her shell as she’s at the age where she should be considering university and careers, rather than fairytales. Unfortunately, this conflict doesn’t really go anywhere. There are no real consequences for Melanie as she gets sucked into the dream world and the lives of the people there. She doesn’t fail exams, and the relationship the parents don’t really sour or come to a head in a big argument. I would have liked to see more  development of her, for her to be more than just the narrator of the story, which is all she is. There’s a reason for her recording her dreams, revealed at the end, but she doesn’t really grow or learn from her experiences.

Melanie’s dreams focus around a particular family. The first story is of Sarah and Thomas, star-crossed lovers who were denied by nature of their birth hundreds of years ago. Now reborn, they fall in love again, but unfortunately so is their enemy, who kept them apart in the part. I’m all for a forbidden and the redeemed love. I adore that sort of thing. My problem with Sarah and Thomas’s story was that it was too easily resolved. They were kept apart by nature of their birth, but now they are reincarnated in right social classes to live happily ever after, and that’s all their really is to it.

There’s an awful lot of happily ever after in this book. As the family moves through the years, children are born, grow up, fall in love, live happily and have more children that do the same. If this hadn’t been the format of the majority of the book, it wouldn’t have bothered me too much, but it ended up dragging for me. I found myself skipping through things because I wasn’t worried that anything was going to really happen.

What I did like was the whimsy of some of the events, which verged on the surreal in places. The moon goes missing in one dream, and in another there’s a spaceship ride to Mercury, where the characters meet the Mercurians and enrol them in solving problems back on Earth. This sort of throwing all rules to the wind and running the story on pure imagination really appealed to me. It felt fresh and different and I wished there was  more of it.

The ending was unsurprising, and there were a few editing issues I noticed that I didn’t see elsewhere.

The book is also illustrated and both the chapter breaks and the illustrations of the characters are a lovely touch that add to the feel of the book. Overall, while I found the characters lacked depth and the plot could have done with more stakes, I can see this working well for younger readers, perhaps as a book for parents to read with their children.